Drawings of Historical Guitars and Lutes

Ian Watchorn here - just wanting to let everyone know that I have begun to publish some of my guitar and lute research in the form of 1:1 drawings of 21 selected instruments, each one accompanied by a detailed description/restoration report and photos of the instrument, both inside and outside.

Below is a list of the entire set. Some descriptions are still incomplete, but as they are finalised I am making them available through Australian Luthiers Supplies.

Hi, Everyone! I know I have been gone for a while, lots of things have happened since I last posted!

I re-topped a Lacôte style guitar I made about ten years ago, it now has an European spruce top and the proper mustache style bridge with pins! Back and sides are California laurel, 595mm string length. I need to French polish it and it is an astounding little guitar with a beautiful voice. I will post my asking price when it is finished!…

Some years back--I forget how many!--I had a discussion here with some Early Guitar and Vihuela posters about a project I was just beginning: a series of short stories involving early guitarists and guitar-makers. Most of the stories were completed about ten years ago, and have seen literary magazine publication. Some of the characters were actual persons, some inventions of mine. In either case, the characters, and the situations that engage them in the stories are mainly…

The Label Lindoro just published my new CD Juegos filarmónicos - Philharmonic Games with Spanish music of the 18th century for 6 course guitar. The composers (Abreu, Ferau, Laporta, Avellana) are unknow for the most part. Here you will find more information. Sample:…

Hello. So, im getting an idea how this site works, slowly, so if someone can tell me how or where it would be better to ask this sort of thing, that would be appreciated.
im new to baroque guitar. so new in fact that my guitar has not arrived yet. Ive been a classical guitar teacher for more than a decade, but the baroque guitar will be new to me.
I will be playing in a recital with a harpsichordist and a tenor vocalist palm sunday 2016. the harpsichordist and i will play the…

I am writing a the general editor of the GFA's new "peer-reviewed journal of guitar studies," Soundboard Scholar(SbS), to invite your engagement with and your written contributions to this interesting new publication venture.

The goal of Soundboard Scholar is to encourage, recognize, and
publish research of the highest caliber related… 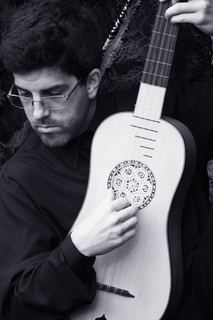 Here, one little prelude by François Campion wrote for baroque guitar, recorded at home whilst I was studying for the session record. I hope that you enjoy it! and renaissance guitars, and vihuela. For those who may be interested in baroque guitar accompanying voice, an edition of airs & recitative by Jean-Baptiste Lully and arranged by Cesare Morelli will be published by the UK Lute Society in November 2014.

This music is from volume 2804 in Samuel Pepys Library at Magdalene College, Cambridge University and the pieces are arrangements from Lully's operas 'Cadmus et Hermione' and 'Thesee'. These are mainly arranged for solo voice, guitar and basso continuo. There is also… Continue

Does any one know or have any information on the piece La Hermosa mentioned by Minguet y Yrol in his treatise on Spanish Dancing? Any pointers would be gratefully received.

I just posted some videos with the 6-course guitar (Vargas, Ferandiere, Abreu).

Here is a recent recording I did of Legnani Caprice #9

This is a work in progress as I hear many areas where there could be improvement.

After I improve this one, I really want to start on Caprice 10, which reminds me of something Mozart  would have written.

The Label "la ma de guido" has just released my CD (De gusto muy delicado) with Spanish 18th century music for the six course guitar. In the following link there can be found more information: http://www.lamadeguido.com/nov_.html

I'm almost done with the "Ovahuela" so it's time to update this blog. This was a fun project. The nice thing about it was the freedom rebuilding an old klunker gives you. I was free to experiment and try things I normally wouldn't if I were building a "period" instrument from scratch.

I bought an old 1970's Ovation Applause from my sister for $50 about ten years or more ago. It was a 6 string (steel), approximately an "OM" shape. It had a…

baroque and vihuela publications for beginners

hi all,mykel here,i have been looking for books for beginners,but not sure as to what to buy.as a beginner can someone point me in the right direction please,thankx