I'm almost done with the "Ovahuela" so it's time to update this blog. This was a fun project. The nice thing about it was the freedom rebuilding an old klunker gives you. I was free to experiment and try things I normally wouldn't if I were building a "period" instrument from scratch.

I bought an old 1970's Ovation Applause from my sister for $50 about ten years or more ago. It was a 6 string (steel), approximately an "OM" shape. It had a laminated (plywood) spruce top, aluminum/resin neck with integral frets, plastic rosette, pickguard, and binding. Of course it was right-handed. Being a lefty I immediately set about making a new nut to string it left-handed. In that sense, I've been a shade tree luthier since I've been playing. I played this guitar like this for quite a few years. It actually sounded decent and was quite loud. It was my camping guitar. I was never satisfied with the neck and the feel of the integrated aluminum frets and no amount of filing and sanding seemed to make them any better. I also didn't like the cheesy plastic rosette and wanted to refill and re-cut the saddle slot so the intonation was correct for a lefty. A few years ago I successfully filled the old saddle slot with a scrap of rosewood from an incense burner, but when I tried to cut the new slot in situ with a narrow chisel, it was a disaster. Of course the chisel slipped and skittered across the top making a nice gouge. I set it aside for years until I came up with the present idea of just rebuilding the whole thing.

From what I have read on the MIMF and elsewhere, professional luthiers who do a lot of repair work don't care for Ovations very much. This is because they are put together with epoxies and God knows what all and taking them apart is not fun. since I didn't plan to save the top, I didn't take great pains at being gentle. I wore a respirator, used a heat gun and metal spatula, removed the plastic binding, then the soundboard. Instead of wood lining, this thing had a plastic liner with a ledge to which the top was glued to. Ovation bowls are reputedly made of a composite material that is used for helicopter blades. The bond between the plastic lining and the helicopter bowl was pretty tough so I had to use mechanical means to remove it. 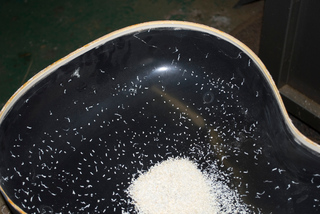 I used a laminate trimmer with a pattern bit (with bearing) to remove the lining. The most difficult part was clamping the bowl to a saw horse out in the garage for this messy task.

Next, I glued in a wood lining, made from old trim molding. I cut kerfs into the molding on a radial arm saw and glued them to the rim with polyurethane glue. 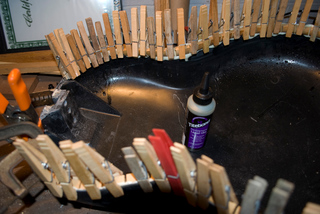 This provided a wood-to-wood surface so I could glue the soundboard on with hide glue.

Next I did a little experimenting: I wanted to see what all the fuss was about with soundports so since this was an old klunker, I decided to drill a hole in the upper bout. The next challenge was dressing the hole in some way. I had some grandiose ideas that didn't pan out and finally settled on the simple: A plastic grommet of the kind you find at the big box stores for putting in a desk to run your computer cables through. For the new soundboard I used a "B" grade Carpathian spruce top I bought last year from Old World Tonewood during my vihuela build. Since it is a lower grade top, I won't pass judgement on Carpathian spruce in general, but the tearout on this board was terrible. It was even difficult to sand out the little "threads" of spruce in various areas of the board. Usually tonewood vendors will say that lower grades refer to cosmetic flaws, not structural ones so I have never bought anything but lower graded tops since I'm building for myself and actually like streaky tops with "character".  As with my vihuela, I braced it like a lute top, or a hybrid lute/vihuela top, I guess. 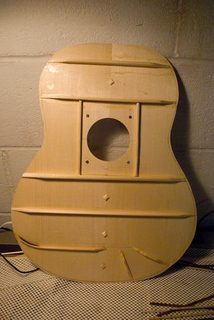 The four dots you see at left around the soundhole are another experiment. At the time I did this, I didn't have a rosette channel cutting jig for my laminate trimmer and I'm not about to attempt cutting one by hand. I also wanted to put in a carved, glued in rose in keeping with early guitars rather than the open soundhole with rosette ring as in modern guitars. Since this is a bolt on neck I wanted a removable rose in case I need access to the inside. A parchment/wood rose is beyond my capability at the moment and buying one would really be earrings on a pig, so I looked for something simple. I found this: At right is an old grill from an air vent from a 1960's vintage Sony open reel deck. It was my first "serious" tape deck; a gift from my father when I was about 13. I wore the thing out, but saved some pieces that looked useful when I finally scrapped it. I liked the simplicity of the squares and my wife thought it reminiscent of a Chinese symbol. So the dots are rare Earth magnets glued into recesses in the soundboard. My idea was to simply attach this steel "rose" with magnets that are strong enough to hold it fast, yet still allow it to be removed. 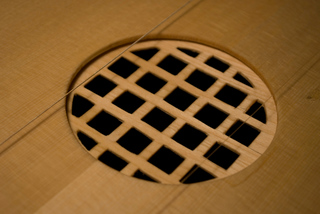 The idea worked, and then again not. The steel is a bit too heavy even though it is quite thin. I also did a big blunder when drilling the recesses in the soundboard and broke through on one of them! The magnets, though small, are too thick for this and even had I not broke through, the rose sat a millimeter or so below the surface of the soundboard so this didn't work. Now a modern rosette inlaid into the soundboard would cover this mistake quite nicely, but by this point the sound hole was cut and the board was already braced so cutting a rosette channel is difficult now. I'm still contemplating some sort of inlay to cover it, but haven't come up with a solution yet. My final solution for the rose itself was to use the steel grill as a template and cut one of basswood. I then removed the magnets from the soundboard and instead glued them to the basswood rose. I then glued small flat washers to the soundboard. This holds the much lighter basswood rose in place, flush with the bottom edge of the soundboard and it can be taken out if need be. The washers are also glued to the soundboard with hide glue so they are removable too if I have a better idea someday down the road. I also sanded in a "scoop" between the bridge and the upper bout since the fingerboard will be flush with the soundboard in keeping with lutes/vihuelas. Then, hide glue, old inner tubes, wide masking tape, and an old bag of lead shot fixed the new soundboard to the old Ovation bowl.

Since the bowl is the helicopter blade plastic whatever, I needed something that would adhere to both it and the soundboard so I had to go with plastic binding. I got this and the toxic cement from LMI. One cool thing about plastic binding though is how easy it is to bend! 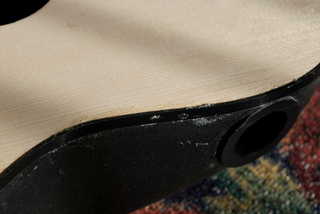 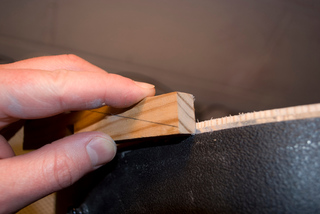 At right is the ledge cut into the side for the binding. It was cut with the laminate trimmer and a bit that is probably now toast. Then sanded with a sanding block made of scrap. Once again, a respirator. That composite helicopter blade whatever is nasty stuff to work with.

At left is the binding before being trimmed flush. To do this, I employed my first Veritas plane! 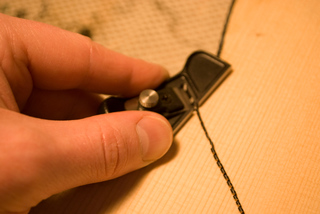 This is the mini shoulder plane that sells for $35.

It's tiny, but not a toy. It's well-made and works well for this. I also am going to experiment with using it to trim lute half-binding and maybe even the rebate if I can finagle the fence to cut a rabbet a few milometers wide. I picked this one up at the Lee Valley store in London Ontario on a visit to my wife's cousin in November. You can order from their website, but at the store you actually get old fashioned personal service, a real nostalgic treat these days.

Before I forget, I carved the bridge from a Pau Ferro pen blank from Woodcraft. Woodcraft also has very good customer service in my experience. I pick up interesting pen blanks from there from time to time when they have them on sale. They are usually only wide enough for a 6-course instrument. 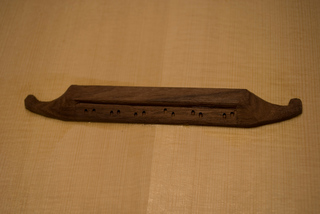 Here, my son is checking out the responsiveness of the top by tapping on it. He is satisfied with its performance. I began this project not knowing if I was going to end up building an "Ovaute" or an "Ovahuela" (lute or vihuela) so the neck/headstock joint is somewhere in between. My original idea was a joint somewhat like what an oud has. 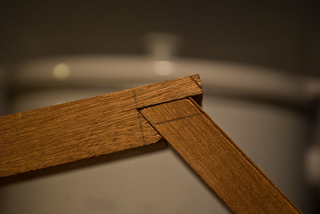 I couldn't quite get this worked out so I ended up with a scarf joint. 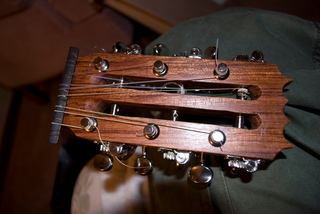 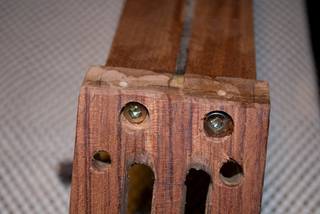 Since the joint entailed long grain being glued to end grain, I reinforced it with two screws, then capped them with plugs made from a cutoff piece of the Bubinga that I used for the headstock veneer. I bought an inexpensive set of machine heads from Elderly.com and arranged them ala Rickenbacker. For a fingerboard, I used this same Bubinga, also from Woodcraft. I planed the fingerboard into a taper to meet the soundboard flush and glued in two "points" or "beards" or "stingers", whatever you want to call them into the soundboard, lute fashion. 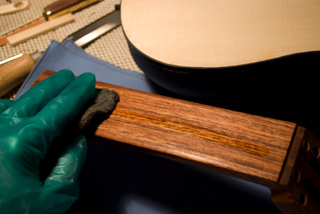 I sanded the fingerboard to 600 grit then applied walnut oil with 00 steel wool; about three coats. 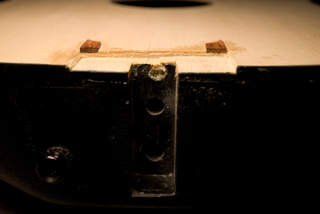 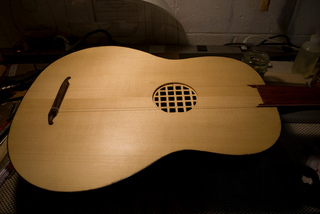 At this point, I still need to make a nut (the one in the headstock photo is an old lute nut for testing), string it up with a new set of strings, and take it for a test drive. More to come....

Thank you for your comments. I used "FGW" adhesive from LMI for the binding:

It seemed to work well for gluing the plastic binding to the Ovation rim and the spruce soundboard edge. It is not a lot of fun to clean up, however. I have to say I am glad the project is done and I can go back to just wood and hide glue!

That was a good read Mark, very interesting and good fun too, you've had a lot to work out with this project. If you need to repair the plastic part at any time, use dichloromethane, it will melt the surface, not tried to bind wood and plastic yet but will try in the morning and let you know how it works out.