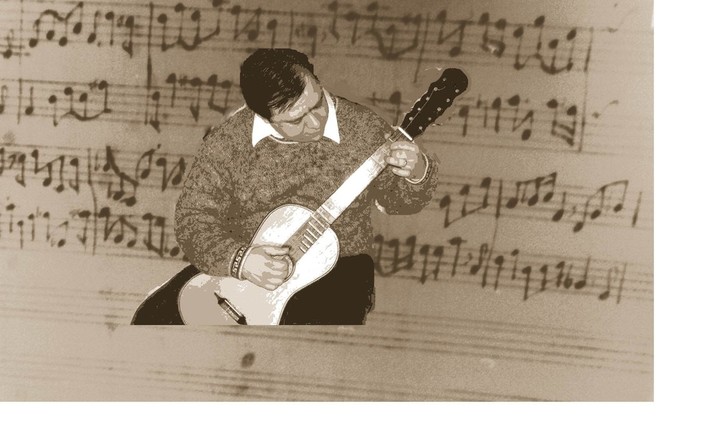 Juan Pablo Pira replied to beppe animosi's discussion Passacaglia of Biber on baroque guitar
"I have some variations... not even close to being finished, but you can get the idea."
Oct 3, 2021

Juan Pablo Pira replied to beppe animosi's discussion Passacaglia of Biber on baroque guitar
"try one step higher.  I think I have at least some of the variations."
Oct 3, 2021

Juan Pablo Pira replied to Rainer Luckhardt's discussion Strange tab-letter in "Tablature de guittarre" de Mr. Dupillé
"I was thinking it could be a trill.  In Spanish tabs you find things like 2% with a 3 underneath the % meaning that you are supposed to trill on frets 2 and 3. Since French tab uses the top line for highest string, it makes sense to use then b…"
Oct 3, 2021

Juan Pablo Pira replied to Monica Hall's discussion Princess anne's "Lute" book
"Though I am over two years late, I hope I can get a copy of it, too.  I was looking for a piece called "Running Footman". Do you know if I can find it there?"
Sep 27, 2021

2. Two pieces from "regla de entrastar". Two beginner pieces from an 18th century guitar instruction book for absolute beginners. Baile inglés is a very simple piece used to explain tablature. Minueto por Alamire Mayor is a short minuet for guitar. My very special thanks to Luis Antonio Rodríguez Torselli who gave me access to these pieces.

3. A passacaglia for four-string guitar tuned in fourths DGcf. This tuning was used in Guatemala in the early 18th century. I thought about transcribing Biber's passacaglia for solo violin, but changed my mind before I reached the fifth bar. (Top line is highest string)
PASACAGLIA.pdf

4. Canario by Guatemalan baroque composer Manuel Alvarez. Very similar to pieces with the same name by Sanz and Guerau. This piece is set for a four-string guitar tuned DGcf. (Bottom line is highest string). UPDATE: Probably, this was not written for a guitar but for a bandurria or a mandola. Both instruments are quite different from the modern instruments with the same name).
Canario.pdf

5. Fantasmas. Another piece by Manuel Alvarez. UPDATE: Probably, this was not written for a guitar but for a bandurria or a mandola. Both instruments are quite different from the modern instruments with the same name).
Fantasmas.pdf

6. Fantasmas del Sueño. Another theme and variations by the same composer. UPDATE: Probably, this was not written for a guitar but for a bandurria or a mandola. Both instruments are quite different from the modern instruments with the same name). Suenho.pdf

7. Gavotte I and II from J.S. Bach's Suite VI for cello solo. Gavotte I y II FR.pdf . Also transcribed from the V cello suite, Sarabande.  I did not use the lute suite since most bass notes would be out of range.  Easy to read through, yet very difficult to play beautifully. sarabande.pdf

8. Dios Nimahau. Part of the Santa Eulalia choir books dated from the late 16th to the early 17th centuries. Originally a small piece for four voices. There is only a partial text -in a Mayan language, possibly Q'anjob'al- for the tiple. The title is partially in Spanish and partially in a Mayan Language and could translate as "God, great Lord". Dios being "God" in Spanish and Nimahau formed by "Nim"- great, large and "Ahau"- Lord or ruler. Modern spelling for Mayan languanges would use "Tyox Nimajaw". I have transcribed it for baroque guitar. "French" tuning is OK, but it sounds better with bourdons on the 4th and 5th strings. Nimahau.pdf

9. Ave Maris Stella. The previous piece reminds me of Antonio de Cabezón's "La dama le demanda", so I decided to add a little piece by this composer. I'm sure it would sound better on a lute, but it works on a baroque guitar. Ave Maris.pdf

10.  Two easy pieces.  These might work better with bourdons on the A string.  Brian Boru.pdf and All through the night.

About me:
I play baroque guitar for fun!!!

Your Bach arrangements are very nice and cool to play ;-) Thanks for providing it.

I have some others by Javier Hinojosa (from the bwv 1006) I will post tomorow 2 menuets.