All the comments I've read about the frets of these instruments assume that they had metal inset frets from the start (ie c. 1750-60).

However, since in Spain we know that these instruments continued being played well into the nineteenth century (1830-40s), it is quite possible that the earliest of these instruments originally possessed tied frets (like the contemporary gallichon/mandora) and may then have generally been refretted with inset metal frets in the early nineteenth century (as common practice for guitars of this later period).

I'd therefore be grateful for any evidence which sheds light on this issue: in particular any iconography (including engravings) of these early (pre- 1800) Spanish instruments which show the rear of the neck.

Goya. There is a high res version of this on the Rijksmuseum website. 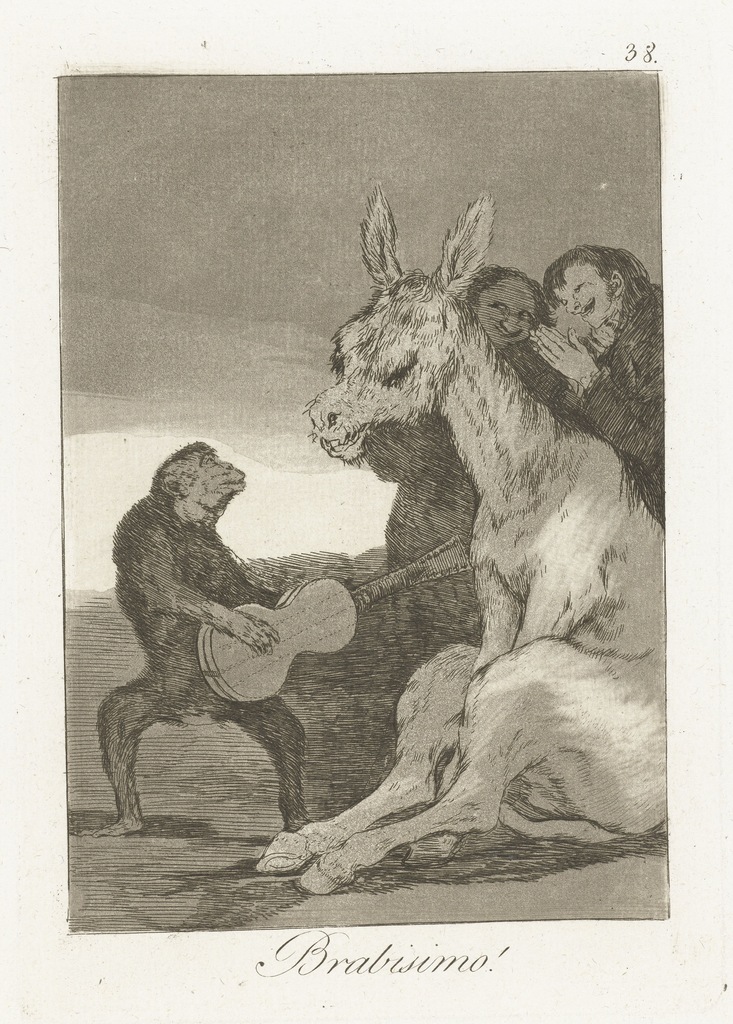 I think we need to consider the Jose Luis Romanillos Sanguino c. 1768 guitar to be hard evidence for the use of graduated frets since it is, by my understanding, in an unaltered pristine condition. The other 1759 Sanguino seem to have the same fret arrangement confirming this principle as important for big guitars with range of a fourth or seventh greater in the bass. Obviously many players continued to prefer tied frets but I don't think we should assume them to be a later addition without clear evidence. Perhaps we need to consider the possibility that metal frets could have been added to five-course guitars even in Murcia's time. The 1777 Joseph de Frias five-course guitar in the Museo de la Festa has ten flat metal frets and is obviously as late as the Sanguino's with complex inlays an exactly similar bridge with string length of 587 mm, short enough to allow an octave third course, which Lorimer suggests for Murcia. I can't find the reference but there is an early 17th reference in Romanillos' book on luthiers to a vihuela with metal frets being strung as a guitar to get it sold.

How do we know that the c.1768 Sanguino is in an 'unaltered pristine' condition?   Since if, as I suggest, a late eighteenth century six course guitar originally with tied frets was refretted with metal in the early nineteenth century, there would nowadays be no trace (unless there is evidence of fret knot indentation on the rear of the neck as I once found with a Stautinger gallichon which had been later refretted with bone frets).

Similarly the The 1777 Joseph de Frias five-course guitar may, of course, have also been silently refretted. This is why I'm really looking for historical evidence (iconographhy in particular) rather than just studying extant instruments which may have been so altered only a few decades after they were first made.

You say that 'Obviously many players continued to prefer tied frets' - I would dearly wish to see the evidence for this since it also supports my hypothesis. Grateful for anything you can find.

The trouble with iconography is that it usually represents just one instance, perhaps using staging with an out of date instrument making it arguably equally unreliable. Why would it matter if Sanguino used frets in the late 1750s and beyond on big guitars? His use of graded frets (later dropped by makers) is derived from tied fret practice, which also suggests it was an earlier application of the idea rather than a later one.

The transition to frets is much easier for guitars since they had long been theoretically recognised as equal temperament instruments, as late as Nassarre in 1824 (see Esses). The harp was not.

The main function metal frets perform is dealing with fret wear caused by silver wound strings, at that time manufactured in Madrid and heavily enough used to justify manufacture. The wear of frets probably increased with higher tension strings. In addition, the other versions of this guitar had 7 courses, requiring an even thicker silver wound string for the low B, which may have needed metal frets in order to sound properly.

I say "obviously" because thousands of guitars must have been made in Spain and changes like metal frets would not have enjoyed universal instantaneous adoption. So both kinds co-existed and Sanguino may have made both: unfortunately we don't have a signed affidavit from him to prove this one way or another.

Jose Luis Romanillos told me that his Sanguino was unaltered and since he owns it and treasures it as a master luthier himself and has examined it very closely seeing the incredible craftsmanship and detail that went into making it, leading me to accept his opinion. The little piece broken off the bridge extensions, easily repaired remains broken. Jose Luis said that the instrument had been saved from barbarous alteration in Spain by its export to Belgium (if I remember correctly), which is where he bought it.

Thank you for this.

However, I think you may have misunderstood my question: I'm not making a case either for or against fixed metal frets vis a vis tied frets on late eighteenth century Spanish six course guitars;  clearly both type of frets are theoretically possible.  Neither am I attempting to discuss he relative merits of either type of fret.

My sole purpose is to ask whether anyone knows of any historical evidence, perhaps early icongraphy (say depictions showing the rear of an instrument's neck), for the use of tied frets on the six course Spanish guitar in the second half of the eighteenth century.

Regarding the presence of metal frets on the c.1768 Sanguino instrument you mentioned, as pointed out earlier, if it originally had tied frets but was converted to metal frets (say in the early nineteenth century) how would we possibly know? - unless there was some hard evidence (such as fret knot indentations I mentioned earlier).  It is exactly for this reason that I asked for historical evidence rather than studying extant instruments which may, or may not, have been altered.

Finally, you write: "I say "obviously" because thousands of guitars must have been made in Spain and changes like metal frets would not have enjoyed universal instantaneous adoption. So both kinds co-existed and Sanguino may have made both: unfortunately we don't have a signed affidavit from him to prove this one way or another." This is precisely the reason we need to look at other sources of evidence for the possible use of of tied frets on the six course Spanish guitar in the second half of the eighteenth century.

Grateful if you, or anyone else, can come up with such.

The six course guitar is still a subject we know very little about. We need anything we can find, iconography, literature, whatever.

I simply suggested that we should not disregard extant instruments when they are of the quality of the Romanillos Sanguino. Like the Capirola manuscript saved by the beauty of its pictures, I think this guitar was saved by its beauty. Could it be a pristine example of a mid-18th century guitar? I have seen it and I feel sure that you would be as moved by it as I was should you ever made the pilgrimage to Siguenza to see it.

This certainly seems to depict a six course guitar (or at least a guitar with twelve pegs) with tied frets.  The date seems to be given at between 1797 - 1799. So this does, indeed, suggest that tied frets were used on at least one six course Spanish guitar and presumably, some pre-1800 others too.  But I wonder how general was the practise?  Any other depiction would be very helpful.

Unfortunately the picture is temporarily unavailable on the museum's website but here's the direct link should it come back.

Further to this,  the picture is now again up on the museum's website and can be studied in more detail.

Unfortunately with the better digital copy it is evident that the marks on the rear of the neck might just as well be Goya's shading to show the curvature of the neck as showing tied frets. In short it doesn't resolve the matter either way!

So I'd still be grateful for any other early pictures showing the rear of Spanish six course guitars necks.....