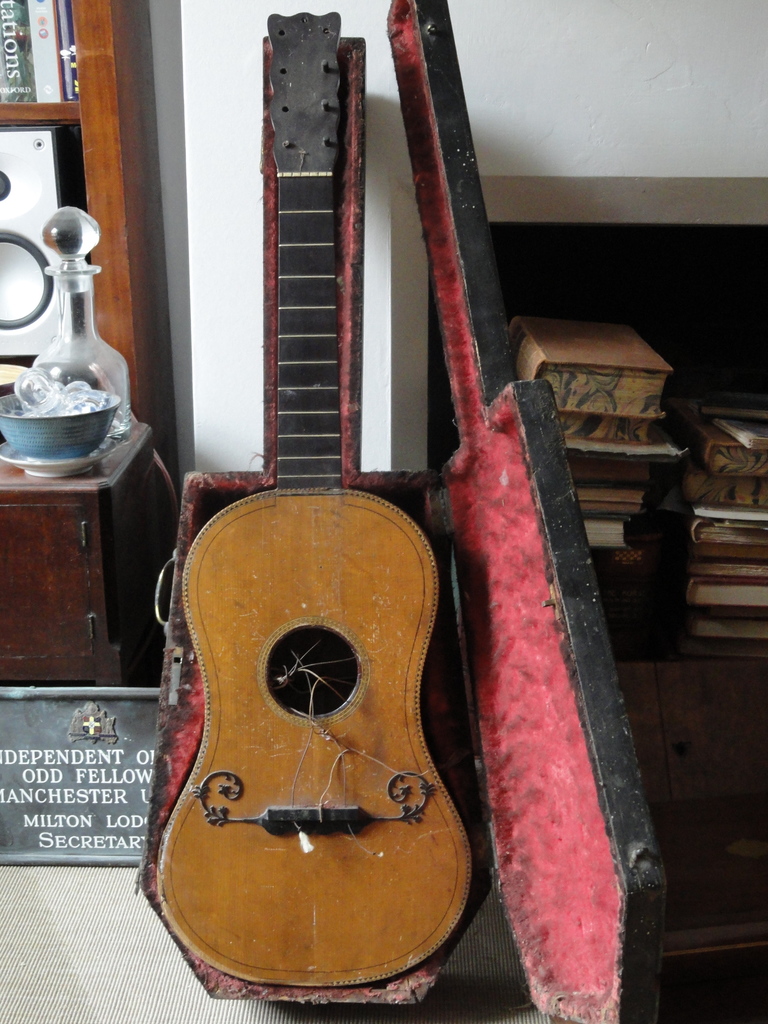 I wonder how many strings/courses the guitar had originally...

The guitar depicted in the image Jelma found (Mel Wong's image) has 6 pegs and an extra hole at the top of the head in the center.  So, the guitar should be made as a 6-single-course guitar, and the extra hole seems to be used to hang the guitar on the wall.

The guitar Peter is selling also has a hole at the top of the head in addition to 8 holes for the pegs.  If this extra hole is there for the same purpose, the guitar could have been made as a 4-double-course guitar.

Mel Wong's guitar has the neck joined roughly at the 12th fret, wheras the neck of Peter's guitar is jointed at the 11th fret.  Judging from the positions of the bridges of both guitars, Peter's guitar (as well as the guitar whose image Hans found) has a shorter scale.

So, it it possible that Peter's guitar is originally made as a 4-double-course chitarrino?

I'm sure Jim Westbrook can tell everything one could possibly ever want to know about this particular sort of guitar. Not in any way trying to steal his thunder, I just explain briefly what I think it is. What it is certainly not is a 'baroque guitar', '4-double-course guitar' etc, not in the slightest!
It is an 8-string(!), guitar-shaped thing which was supposed to be tuned in an open-chord, English Guitar sort of tuning, quite possibly preceding (or, indeed, being contemporary with) a more fancy-looking 8-string Harp-Guitar, i.e. as on this link:

There was, I believe, a 6-string version too and there is at least one iconographic representation (if I manage to find it, I'll post it here) where an 8-string instrument is stung with 6 strings only.

PS: The hole at the peg head top is not for a peg, it is for a strap!

Alexander, I don't think you are stealing Jim Westbrook's thunder (I enjoy reading his book by the way), but your reply DOES sound like a thunder to me!

I had no idea that such kind of guitar ever existed.  Thank you for the heads-up.  Indeed there are so many things to learn!

Permalink Reply by Alexander Batov on July 12, 2011 at 21:15
Well, I don't know which particular guitars you are talking about, that look 'just like Peter's guitar'? I very much doubt that! To my knowledge, there are only two surviving (proper!) baroque guitars with 9 peg hole configuration, where the central one is positioned at the top of the peg head (see footnote 18 on this page: http://www.vihuelademano.com/rcmdias.htm#r18)

Or scroll to the middle of the same page to see some more iconographic examples with the similar sort of arrangement.

Again, the 'guitar' under question has nothing to do with baroque guitar tradition at all, it is just a poorly-conceived clone of one, both internally and externally.

Permalink Reply by Peter Clapham on July 12, 2011 at 22:54
Am finding this discussion very interesting , thanks for keeping me very entertained .

Alexander, I was referring to the guitar whose image you posted (the 8-string one with the body that looks like Martin Backpacker).

Permalink Reply by Peter Clapham on July 12, 2011 at 18:31
Yes thats the guitar . Very slight difference on the moustache bridge , otherwise the same guitar. Very clever of you to find this picture .

Oh dear, I thought that Tyler's example would come up and it did, just like a fantom ... Can I just say, without going into any further explanation (because it simply doesn't deserve it), that this was his rather sad mistake: a musicologist making an organological mistake - this is just so typical! I don't blame him for this though, he contributed so much to the study of the early guitar from which we all benefited; organology was simply not his forte. It does, however, takes ages to eradicate such mistakes, because once the word / idea is printed it becomes (quite mysteriously so) a kind of  'universal truth', sunk and consolidated in people's minds.

And on this very note I must say goodbye to this topic. All I wanted to say I've already said and it just feels as a waste of time to debate any further.