The front cover of Christopher Pages' new book"The Guitar in Tudor England" shows a guitar depicted in marquetry form on a table in Hardwick Hall.  The thing that immediately drew my attention was that the soundhole is positioned below the waist of the body, rather than its more usual position a little above. 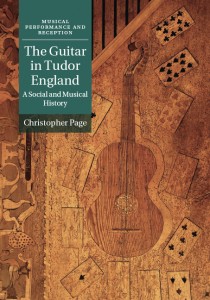 A article mentioning the book gives another illustration of a rather similar guitar that also shares this feature. Apparently it is the border of a portrait of Robert Dudley, Earl of Leicester.  Having two depictions of similar instruments suggests it is less likely to be artistic license.  Were guitars made like this in Tudor times, and if so, what difference to the sound/barring etc. is this likely to make?

You will know that there are many lute depictions which have similarly placed roses, and which are (almost!) all regarded as artists' error.  If it had been only the Dudley representation I think we could definitely have placed it in the same category.  The Eglantine table marquetry is less immediately dismissable.  Besides the guitar, there are also a lute, cittern, harp and various sizes of viol.  A high degree of realism, allowing for the medium, and individual workmen(?) is present.  It has been suggested that the viols are a high pitch set, but it seems more likely that they have been depicted half-size.  (Somewhere! I have basic measurements of all the instruments made around 30 years ago).  The lute and cittern seem to be exactly full-size, and both Christopher Page and myself think that the guitar is also.  Roughly, ukelele-sized.  Since the table has been cleaned it is possible to see that the cittern fingerboard has remarkably accurately set frets, in a mean-tone pattern, although the colour-coding doesn't follow the usual order, and there are no balusters on the body.  It's, and the lute's roses are as we'd expect.  But both the lute and the guitar have obviously badly placed frets - the guitar's particularly so - so I suspect another misplaced rose here.  Having said this, it might be worth looking at the instrument from the V&A overmantel on the back cover of the book, which I had always thought of as an Italian-inspired viola da mano/vihuela.  Here the rose is roughly central, as are many of the Italian representations, and I made several successful little 'violas' with a central rose and a curved back.  Arguing that in Italy there would have been influence from the lute, I used two bars above, and two below the rose.  This seemed to work.  I think you should experiment - at worst you will have a small, wasted sound-board! 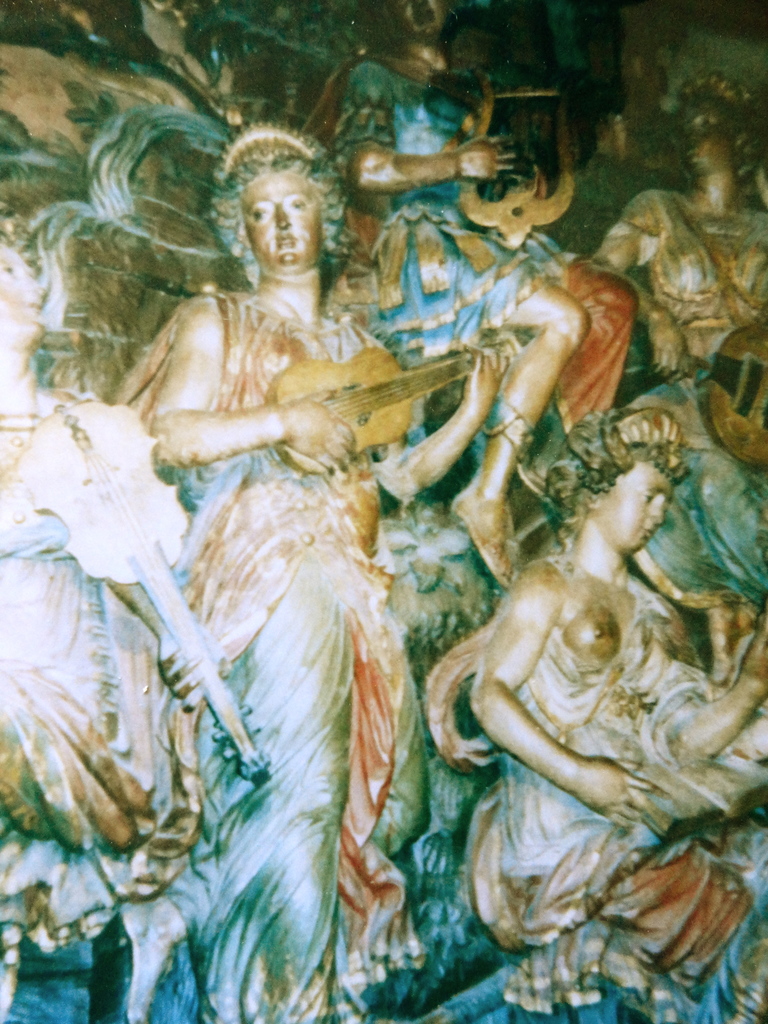 Apologies for quality - an (accidental) flash photo taken when the overmantel was in a very dark area of the, now destroyed, musical instrument collection of the V&A.  The overmantel is now more visible in the historical interiors section.

Thanks Peter, both comments are very interesting, I'll have a look for italian vioa da mano.  I would like to build a renaissance guitar once I have finished my Baroque guitar (provided I am able to do so!), but I think I'd try something more conventional first!

The engraving reproduced is indeed from the border of a portrait of Robert Dudley. It appears in The Bishops' Bible of 1568. The reproduction is taken from p. 18 of my book on the Tudor guitar. The position of the soundhole is indeed interesting, but I was more struck, when I commissioned this digital enlargement, that the artist (? Franz Hogenberg) has taken the trouble, despite the tiny scale on which he is working, to show four-course tablature. The image reproduced by Peter was one that he first brought to my attention, for which I remain immensely grateful to him. I had it photographed by the V and A; it appears in colour on the back dust jacket of the book and within in black and white.

Who'd be an author these days, when the traditional academic monograph is in its twilight years?  I shudder to think how much the commissioning of these images cost me!

I hope the sales will be an adequate reward for the effort, I haven't acquired a copy yet, but I will!

I hadn't noticed the tablature, it would seems slightly incongruous if the tablature were realistic, implying the artist might a musician, but the soundhole placement on the instrument wasn't!

Here is another interesting painting of an instrument with interesting soundhole placement (via Juan Carlos Rivera Pecellin, the artist is Juan de Juanes). The print run was only 400!  Cambridge University Press tells me current sales are just over 220. Perhaps I might just mention here that I am completing the next volume of the study, which will be entitled The Guitar in Stuart England: A Social and Musical History. After that the Georgians (!). Much of the content of the Georgian book, and many of the illustrations, mostly from my own collection (so no copyright problem) are already available on the website 'Gresham Professor of Music'.

The material can also be reached via the website 'Consortium for Guitar Research'.

this my guitar sound hole position in centre sounboard.

nice looking guitar, how old is it?  The floral moustaches are nice, is the bridge a later addition?

I do net know about that guitar almost nothing Ibought it at an auction.