What kind of tuner are you using?

Hello, folks, this is more of a practical topic rather than an academic one:

When I purchased my first period instrument (renaissance guitar in my case), one of the initial problems to encounter was what tuner I should or could use.  I know that A=415 and 392 are almost G# and G in A=440 respectively, so a most ubiquitous tuning fork of A=440 can be used for these pitches in a pinch.  Luckily I managed to find the tuning forks of A=415 and 392Hz, but what should I do with, say, A=380?

Here I found a nice solution: this software called "Freqtune" for iPhone/iPad/iPod Touch.  The great thing about this smart sftware is that you can set six different frequencies at your will.  All you have to do is to set the frequency in each column on the right using the keyboard that appears when you tap the column.  Then you tap one of the buttons on the left for each frequency and you have the sound of either sine, square, triangle or sawtooth wave.  Obviously, the sine wave is the most preferable for the purpose.  Freqtune costs 350 JPY which is way cheaper than any tuning fork(s) so long as you already have either of the hardware mentioned above.  The software was developed by a Japanese company but the language on which it is based is English.  It should be sold internationally.

The attached image is the screen shot of the main viewing surface.  Hope you would find it informative. 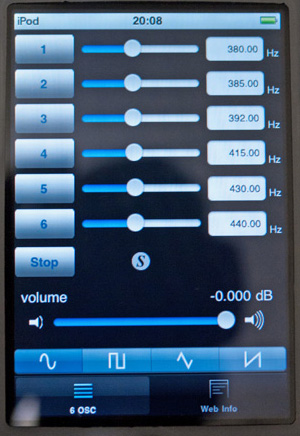 Here's another software for iPhone/iPod Touch called "onsA440". "Onsa" means "tuning fork" in Japanese and the name of the software is a play on words with "Onsa" and "A=440".

Actually I've had this software for some time, but the previous version only allowed to set the frequency around 435-445Hz. However, it has been updated recently and the current available version allows to set the frequency from 100.00 to 999.99Hz. Again, this is developed by a Japanese engineer but all the user interface is in English. And, THIS IS FREE!

If you don't need to switch between different frequencies frequently (sorry for the pun. I couldn't resist), this would be more preferable. The latest version officially supports iOS4. Here are the screen shots. Tap the central area of the tuning fork to make sound. 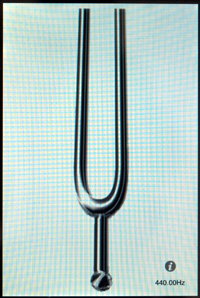 Getting concerned about pitch seems more of a 20th/21st century peroccupation than a historical issue. Up until the late 1800's pitch varied anywhere from A376 to A570 depending on country, state and era. Neighbouring towns were known to have different pitch requirements. Even today there are some orchestras that play higher than A440 and some lower. If it sounds good, do it!

However, having said that...I love playing with those electronic gadgets. Thanks for pointing out that software.

Everything you ever wanted to know (and some you didn't) about pitch, check here

Permalink Reply by Akira Sakamoto on July 17, 2010 at 6:13
Thanks, Scot, for the detailed info and the direction to the useful website! I've bookmarked it.