Mold - Inside or outside?

Just wondering if any of you makers can tell me their views on the relative merits and demerits of building a renaissance or baroque guitar, with or without vaulted back using a mold that fits inside the ribs, or a mold that the ribs fit inside.

I made a small ren. guitar using an outside mold and no vault to the back. 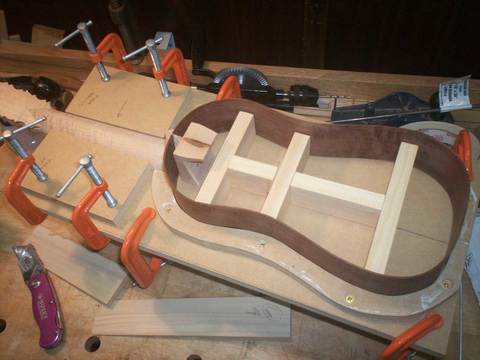 I use outside molds for all my instruments. I agree with 99.99% of what Andrew says and those things where I differ are only because of my building process.

I do make one model with a strongly vaulted back and as Andrew says, you do need a seperate mold for that...or at least I haven't figured out how to do the back without one. But one further issue I have with the vaulted back is that it's two ply veneer so it's pretty much impossible to do without a form.

An even easier way to do "one offs" is the traditional Spanish way where one builds without a form but instead uses the top as the form. This involves gluing tiny bits of wood around the perimeter of the shape and using those as the form. There's more to it than that but that's a quick overview. I like to use this method if I'm doing an instrument design that I don't plan to build again as there are no forms needed except the shape template and  your regular workboard.

2-ply veneer? Are you sandwiching two thin layers to make a homogenous-looking back or are you building with multiple strakes? Not sure I followed you...

I should be clear, I basically only make 19th century guitar replicas for my business but occassionally the odd vihuela or baroque guitar for my own use.  So I'm talking about 19th century instruments mainly.

The two ply are a feature of some 19th century guitars where rosewood (sometimes other exotic or rare woods) is veneered to a maple, fruitwood or spruce base to form the back. Most often one piece of rosewood veneer but sometimes book matched. It was used for a couple reasons 1) the aesthetic of the time did not favor the rosewood tone as much as today for modern guitars; 2) and maybe more importantly, the cost of the material was such that it made better financial sense to stretch you stash of material as far as possible...just like today. There are other reasons but those seem to be the main ones.

I generally only do these backs for some Stauffer models, occassionally Lacote, and the Scherzer which has a double back, both veneered over fruitwoods or spruce. It's also the only way without a hugh press to get the multiple arched shape in these backs...that I am aware of. if anyone has a better method, I'm all ears!

So this is done over a female mold. Originally they most likely used heated sandbags to sandwich these pieces together and into shape over the mold. It's a traditional method of veneering in the old days but I cheat and use a hand pump vaccum press designed for making skateboards...cheap and effective...ah, modern technology!

...that all depends on how many molds one has. I make no less than 15 different body shapes for my instrument catalogue and each one requires a seperate external mold. I have one whole section of my shop with molds taking up the space from floor to ceiling. One mold may store easily but many...not so much.

I used the Spanish moldless method I outlined above for quite a while but found that keeping the shape of the instrument uniform and the angles true was more cumbersome than I wanted to deal with in my old age. So, I switched to external molds. I also use my mold for other things than holding the shape. For example, it also doubles as the template to cut shape of the sides.

Permalink Reply by Rob MacKillop on October 6, 2011 at 12:40
Speaking as a player, I much prefer flat-backs over vaulted. Easier. Cheaper. Better.

Yeah, no doubt! If Rob says flatbacks are better, that's good enough for me!

I do think the vaulted backs look cool, though. I have to admit too that I enjoy playing my vihuela a little more than my lute because it is a lot more comfortable to hold - that and it's the first thing I built so I'm drawn to it more because of that too ;)

Thanks Andrew for documenting your builds! I love to see pictures of instrument builds. A picture is indeed worth a 1,000 words.

I can also balance a bit by stating that I use inside molds for my citterns (though this is not what was asked about!). It is essential on them since historically the sides wrap around the back instead of the back being glued onto the edge of the ribs. (Presumably this is to allow an increased gluing area, as the backs are substantially thicker than the sides.)

I agree that inside molds are useful for securing neck blocks and bottom blocks. For the guitar I made with the outside mold, the neck block was integral with the neck. It was "locked" into place with a couple of boards with their edges planed at a slight angle (see photo from my original post); the bottom block was glued in afterwards, though I could do this easily since the sides were in fact made of a single piece...

Hi again Bill. I've made 50 - 60 small guitars with vaulted backs on an inside mould.  I've given it away now to force myself to concentrate. A flat back only needs a simple outside outline unless you are going to do something more complex like stripes. Vaulted backs are possible, but as Andrew says, you will need a separate mould to construct the back and fitting it takes time and temper. Despite which I still build my bandoras this way - I have made a solid mould but don't like using it. Mersenne says that bandoras don't need a mould. So...

Unless you are using a very thick back a la Voboam family, you will probably want 2 or 3 bars there. I suggest that they should be slightly convex like a modern guitar.

Bandora having its end block glued in attached to show a simple mould with complex curves. I am about to go and do exactly the same operation on another.

Thanks Peter.  Loads of possibilities then!  With this being a one-off I'll keep it as simple as possible - no carved solid molds or anything like that!

You mention that Voboams have very thick backs - I hadn't realised that.  What sort of thickness would they be?

Permalink Reply by Peter Forrester on October 7, 2011 at 10:25
Those I've measured have all been around 3.5 mm, in, I think, yew (some of the books say cedar), with ebony sides. No bars (originally). I haven't looked inside any of the fancier ones.

Permalink Reply by Gavin Cawley on October 7, 2011 at 10:29
Hi Peter, another very interesting picture (I love the shapes of bandoras, orpharions and festooned viols).  For flat back guitars would you still glue the back on first before the soundboard? I assume the advantage of putting the soundboard on first would be to allow parchement reinforcement around the edges, are there any other advantages/disadvantages I should consider?  Does the slightly darker board act as a shim to set the angle between the neck and the body?