I was looking through my collection of Soundboard magazine and I came accross this amazing cover. 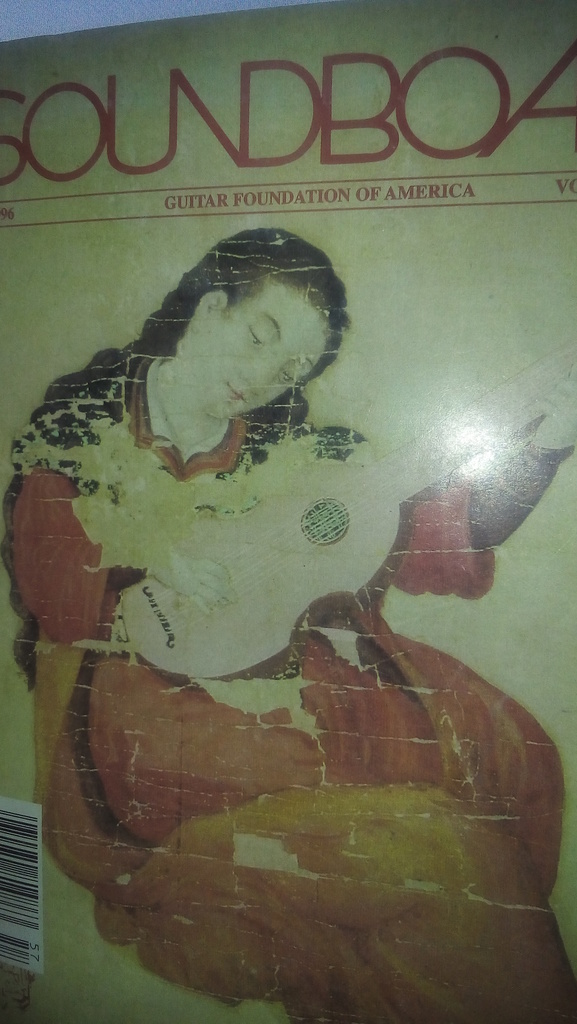 This Japanese print shows a lady playing what could be a 5 course baroque guitar.  Only 4 courses show at the bridge, but the instrument has 9 tuning pegs. A strange viola-like shape, but I would still think this is a guitar (or maybe a five-course vihuela).

¿Is this evidence of European-style music in the far East? ¿Is there any music for guitar in these really distant locations?

I was thinking... as is well known, baroque guitars were played in many places in Latin America in the XVIII century. ¿Has anyone found anything like that in the Phillipines, Macau or other European-influenced places in the far East?

It would be amazing to know of something like that.

I wrote an online article on the history of the guitar in Japan in 1997.

There was an issue of Gendai Guitar in Japan which had some additional images. I can probably find it if you're interested. From what I remember there were some images that were copied multiple times with slight variations. These were often by Japanese Jesuit students so the images tend to have some mixes of original European design and local influences. This is particularly clear in the image on my site by Bunsen Takagawa where what was probably a banjo was drawn more like a shamisen.

Thank you very much.  I read, and liked your very informative article.  A funny thing... it looks to me like the Japanese remembered something about the guitars that the jesuits had brought to them centuries before. Those 4-string guitars look somehow like older instruments and not like 19th century guitars.

I would be very interested in the Gendai article.

Examples of shamisen and biwa from the Meiji period are below. These are the instruments in the 1854 drawing the artist was mixing with Western instruments he had never seen before.

Unfortunately it turns out I don't have the original magazine but do have a photocopy from my research. This PDF is now linked in my original article. Sorry about the quality. I didn't have access to a good photocopy machine.